When we talk about interior design “style”, what are we actually talking about?

Have you ever entered a furniture store and been confronted with a question:

which style do you want in your new home?

So today we are here to discuss what "styles" really mean to you and how we can benefit from them better.

Which style can you tell this room represents?

Classic, modern, industrial, Scandinavian, Bohemian... maybe more. Can you feel the unique flavor that cannot be obtained by using one style throughout?

Non-designers usually romanticize and simplify the process of design, believing that it can be summarized by a "style" name, and that good designs are pure results of gathering beautiful examples which they have seen before.

There are occasions where people complain about their disappointments when decorating their homes by following a magazine photo. Well, here is the problem. Without putting into your specific context, copying from another interior will most likely lose the "soul" part of a project. Like many other things we do, context should be taken into account when designing our homes.

What is the context of an architectural or interior style?

How do you think a style was formed?

Any style that you can give a name to is an embodiment of a certain era or region. It reflects people's lifestyles, tastes and the level of technology and craftsmanship of that time. Applying a type of "style" without understanding the relevant context of how it originated will hurt the integrity of the design process.

The builder of an American colonial house in 1740 did not think, as we often do today, “I really like colonials, I think I’ll build one.” Rather, houses were built sensibly with the materials and technology available, and with an eye sensitively attuned to proportion, scale, and harmony … True architectural style does not come from a conscious effort to create a particular look. It results obliquely - even accidentally - out of a holistic process. (Frederick 82)

American colonial architecture includes several building design styles associated with the colonial period of the US, including First Period English, French Colonial, Spanish Colonial, Dutch Colonial, and Georgian. Take the Spanish Colonial homes as an example. They were first built in the parts of America settled by Spaniards— Florida, California, and throughout the Southwest—from the 1600s to the mid-1800s. Since the Spanish settled in areas with similar climates as their homeland, the houses they built were quite similar to those found in Spain. For instance, typical white stucco over adobe brick or stone wall which helped keep the houses cool. To be practical, colonizing settlers also merged building practices of their home nation with the local materials and tools available. 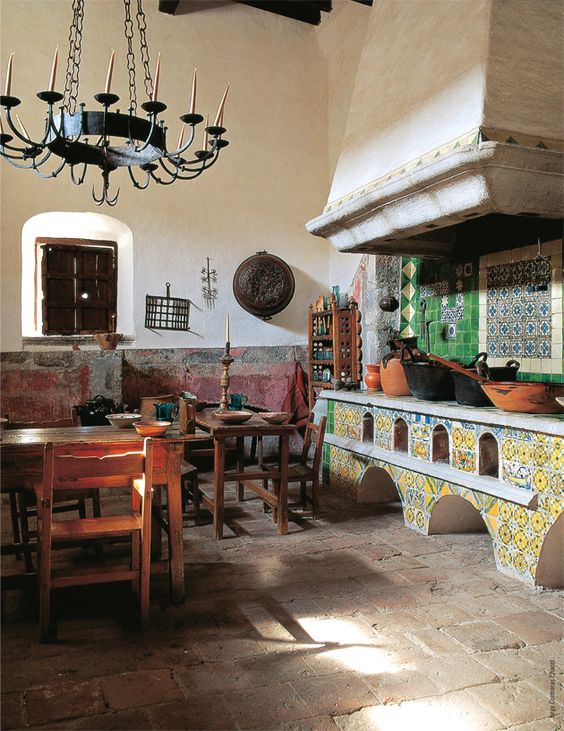 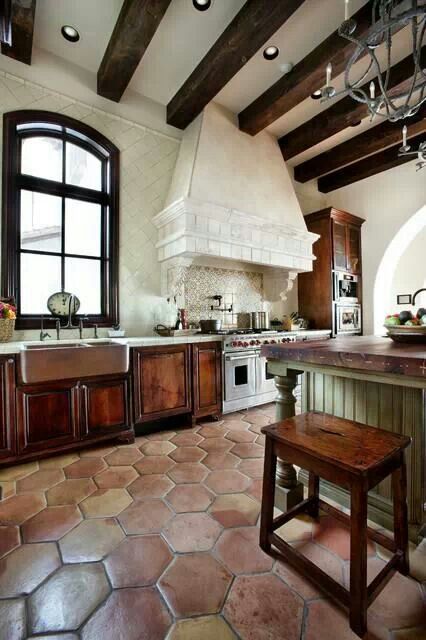 Whitewashed stucco walls, hand-glazed tiles on the kitchen backsplash, sculptural stove hood and the wrought iron chandelier above the table are typical elements of Spanish Colonial kitchens, which were highly associated with the techniques then and the culture of the two nations. Images from pinterest.ca

Since Spanish Colonial architecture was built across such a large geographic area with different indigenous populations, the style has some regional distinctions as well. "Despite sharing the same Spanish cultural traditions and building techniques, the Southeast and Southwest had markedly different stylistic responses, based upon their specific geography and indigenous cultures," explains Andrew Cogar, AIA, and president of Historical Concepts, an architecture firm based in Atlanta and NYC that specializes in traditional homes.

That, is a context of an architectural style.

Spanish Colonial style continues to have its popularity for homes in temperate climate zones. When homes that share a similar context are integrating this type of style, they look more authentic than artificial.

Art style can explain it in another angle.

Post-Impressionists were dissatisfied with the triviality of subject matter and the loss of structure in Impressionist paintings. They believed that color could be independent of form & composition as an emotional & aesthetic bearer of meaning. Within this context, one of the best-known Post-impressionists Vincent Van Gogh found his euphoria through experimenting with his own painting techniques, instead of deciding in the very beginning that “I am going to paint Post-impressionism style”. No mention that the term Post-impressionism was first used in 1906, 16 years after his death.

In Van Gogh's letters to his younger brother Theo which we could read like a continuous diary, we feel the artist's sense of mission, his struggle and triumphs, his desperate loneliness and longing for companionship, and we become aware of the immense strain under which he worked with feverish energy... He longed for an unsophisticated art which would not only appeal to rich connoisseurs but give joy and consolation to every human being. (Gombrich 420)

Van Gogh admired the coloured Japanese prints. He wanted his paintings to have the direct and strong effect of those prints. He also had absorbed the lessons of Impressionism. He liked the technique of painting in dots and strokes of pure colour, but under his hands, it became something rather different from what other Paris artists had meant it to be. As a painter, he developed his own technique to express what he felt, and if distortion helped him to achieve this aim he would use distortion, which gradually formed this unprecedented style. He had arrived at this point without wanting to overthrow the old standards of art. He didn't pose himself as "revolutionary"; he didn't want to shock the complacent critics. In fact, he had almost given up hope of anyone paying attention to his paintings - he just worked because he had to.

In the Japanese print shown here, we can consciously feel the inspiration that Van Gogh had taken, bases on which he developed his own way of expressing emotions. It is no accident that this type of print also reminds us of posters. It turned out that the approach that Europe had learnt from the Japanese proved particularly suited to the art of advertising.

We enjoy Van Gogh's paintings today because we are getting inspired by his passion and talent through his masterwork. His initial motivation for painting was not to do something that would follow certain guidelines or be categorizes as a Post-impressionism style. Ever since artists had become self-conscious about "style" they felt distrustful of convention and impatient of mere skill. For interior designers and homeowners, I would wish us all to be pursuing an art which doesn't consist of tricks that can be learnt as mere styles, but something strong and powerful like human passion.

What can we do if we don't talk about style?

Why do people talk about styles immediately when there is a subject regarding home renovations? Because those are the only terms that would promptly convey what they understand about interior design. It is understandable for the general public not equipped with profound knowledge about style and design, but craving for something seen in a magazine or your friend's home without asking why you like it is not the right start. That's where the problem is and the reason why we see so many "me too" types of homes which don't resonate with us.

I am not saying that liking certain styles is useless. "Liking" itself is actually indispensable. Yes, we can talk about style; but, we should ask ourselves at least 4 questions:

Such analysis and comparison are the touchstones of whether your "liking" is reliable. They work effectively by marring sensations with rational thinking. Isn't it what we have learnt from design school?

As to residential interiors, talking about styles of each object like a piece of furniture is totally working. Then find out how they can come together harmoniously to constitute a unique living space of your own. A single one style throughout the entire house will never serve the purpose of telling who you are. And, it is boring.

Once a supplier friend of mine showed me his newly renovated kitchen where a white marble backsplash, to my eye, looked a little incompatible in the surroundings.

Maybe seeing me not very impressed, he emphasized “You don’t like it? It’s a book-match!” (Bookmatching is the practice of matching two or more slabs of stone, so that the two adjoining surfaces mirror each other, like an opened book. This matching type usually costs more.)

What I want to say here is that people like labeling things much more than sensing them. It's fast, it's direct, and it's brainless. A name is just a name, like a style, it doesn't explain why you like it. Unlike adjectives such as warm, pleasant, cozy, or cold, intimidating, ugly, etc, no style name can tell whether we should like or not. People may find me reluctant to answer the question "which styles do you like?". That's because, I don't dislike any style. There is no bad style, only bad design. I like all good designs regardless of which style they represent. Funning enough, when people think some look is outdated, it's actually not because they are not on the trend, it's because they were poorly designed. Good designs will never be outdated. I also hate when people ask me which style I do. The closest answer I can give is eclecticism which essentially incorporates a mixture of different styles and approaches, and ultimately creates something that is new and original. A more arrogant answer would be "my style". To give a definition, my style is to put things together in a way that I find functional and beautiful. The human civilization is always evolving, yes, we also evolve based on others' achievements, but why should we define ourselves or our work by predecessors?

Homework: which styles can you detect from this image? Do you like how they work together? Please leave comments below to discuss.

Shenwei Design is thriving to accommodate everyone who is passionate about life, who embraces details in living experience, and who loves challenges.

Understanding the purpose of interior "decorating", you won't stuff your precious space with trash.

What can we learn from this former abattoir in Paris before planning a home interior renovation?